Social media users were left stranded on Monday evening following a downtime of Facebook, Instagram, and WhatsApp but on the other side of the divide, cryptocurrency users were basking in the euphoria of BTC crossing $50K.

Bitcoin started October on a high note but investors still harbored a degree of skepticism for the asset. On Monday, investors were jubilant as the price of the premier cryptocurrency surpassed $49,000 bringing its market capitalization to $928.68 billion. The recent metrics indicate a $3.02% rise over the last 24 hours and an impressive 20.89% in the last 7 days. Daily trading volume for the asset class has climbed by a staggering 32.41% to settle at $34 billion. 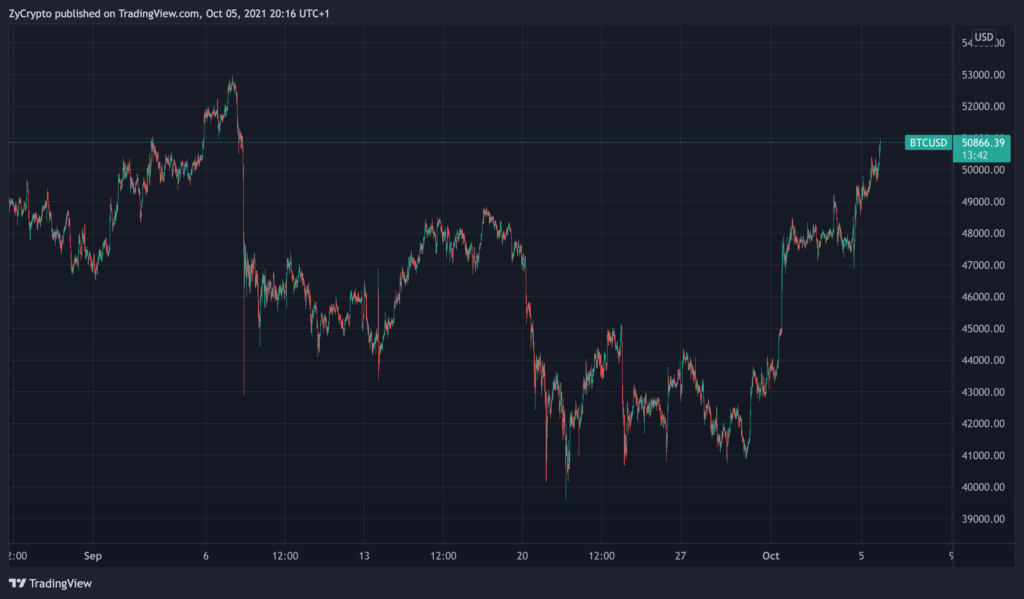 As Bitcoin racked these impressive figures, the trio of Facebook, Instagram, and Whatsapp experienced a significant downtime that lasted for over 6 hours. This had an adverse effect on Facebook’s stock price as it fell by more than 5% to trade at $326.23.

Facebook apologized via Twitter saying, “We’re aware that some people are having trouble accessing our apps and products. We’re working to get things back to normal as quickly as possible, and we apologize for any inconvenience.”

The remote cause of the outage has been blamed on “networking issues” according to Mike Schroepfer, Facebook’s CTO. After nearly 7 hours, services on Facebook, Instagram, and Whatsapp were restored with Mark Zuckerberg saying, “Sorry for the disruption today – I know how much you rely on our services to stay connected with the people you care about.”

In the wake of the social media downtime, several commentators have called for the exodus towards decentralized social networks. Some have described the downtime as a small victory of Web 3.0 over Web 2.0.

Twitter has already begun experimenting with decentralization after its CEO, Jack Dorsey announced that it had funded a dedicated team for the development of a decentralized standard. This is coming on the heels of the glaring challenges associated with a centralized platform, with Dorsey noting that long-term scaling with centralization is almost impossible “without placing far too much burden on the people.”

Concerns were also raised over the potential disaster that might have ensued if Diem, Facebook’s cryptocurrency project had been launched. With over 2 billion active users, the effects would have been profound for the entire industry.

Tags: A, bitcoin, for, Optimism, Sparks