Bitcoin’s potential use cases have evolved a lot since its launch over a decade ago, with quite a few factors contributing to the same; scalability being one of them. Interestingly, in a bid to boost Bitcoin’s scalability as a payment solution and to improve on its security features, the Lighting Network was once pitted as the go-to layered solution. However, not much has come out of this implementation, a development that leads to the question of whether the promises of the Lightning Network still have an audience within the ecosystem.

Speaking on the latest episode of the Stephen Livera podcast Sergej Kotliar, CEO of Bitrefill, elaborated on what the Lightning Network means for the Bitcoin network and its adoption levels and whether or not a link can be established between privacy features and bad actors exploiting the space.

Kotliar argued that when it comes to technological advances that can help Bitcoin and the crypto-industry as a whole, Lightning still represents the solution that can bring about a circular economy within crypto, making it extremely efficient and cost-effective. He said,

“We think is the most likely candidate. For being the technology that’s that, that brings about the circular economy in the cryptocurrency world….But it’s still a niche and [if you were to] ask me a year ago, I would have definitely thought that we would have been much more further along in terms of lightning adoption than we actually are right now.”

Taking a look at Bitcoin’s network data provided by Coin.Dance shows a steady increase in Bitcoin’s daily average transaction fees. In the past year, the average has risen from 154.3c to over 325c, at the time of writing. Kotliar went on to elaborate on whether or not transaction fees remain a motivator for higher Lightning adoption rates, particularly when it comes to exchanges supporting it and given the fact that Bitcoin’s primary narrative has moved towards that of a speculative and long-term asset. He said,

“I think that high transaction fees are one such motivator. But in the lightning world, things are different and you still don’t have, enough exchanges supporting it, which I think is a big thing, given how the industry is centered around different kinds of speculative uses and the majority of traffic is happening between exchanges.”

Kotliar also pointed out that when it comes to the network’s privacy-related upgrades via solutions like Lightning, they are underestimated and the possibility that bad actors will exploit such advances still constitute just a small fraction. 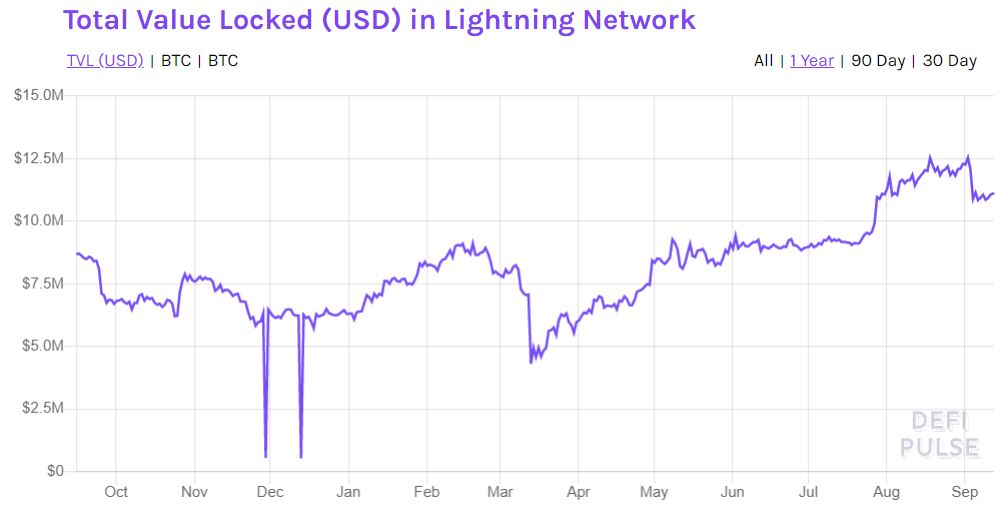 However, taking a look at the total value locked in Lightning paints a more promising picture, with the value locked rising from around $4 million to over $12.5 million in the past few months alone.