In the second consecutive week, Bitcoin’s price opened the week on a low note as the price fell below $58,000 ahead of this year’s annual Thanksgiving Holiday.

The event, which will be held on Thursday, has often been associated with low volatility as traders keep away for the celebrations. Meanwhile, Ethereum is also striving to stay above $4,000 after momentarily recovering from last week’s dip.

Bitcoin’s recent shed has been attributed to a myriad of issues including Hillary Clinton’s negative remarks and the FUD around a possible dump by Mt Gox Bitcoin creditors.

The FED is also expected to issue FOMC minutes later in the week with consumers waiting to see if Jerome Powell’s “transitory inflation” claims will come to fruition.

In the past few weeks, the FED has come under the spotlight even as CPI figures released last week showed that inflation levels had reached fever levels pitting the dollar against Bitcoin with more Americans seeking an alternative hedge against inflation.

Following the release, Jerome Powell and a cohort of policymakers insisted that while prices on goods were expected to rise further before tapering, they would soon push back without depressing the overall economic recovery.

The cryptocurrency community has also its eyes fixed on who the POTUS could appoint as FED chair in the week as Powell’s term nears an end.

Previously, Powell has asserted that the FED has “no intention” of banning crypto even as Biden said that he is looking for continuity in the FED.

Biden has the option of re-appointing Powell for another four-year term or replacing him with Lael Brainard, who has served in FED’s B.O.G and strongly backed the creation of a CBDC in her term.

Despite the appointments being crucial in determining how the monetary policy will be run for the next four years, a section of insiders believes that Brainard’s appointment may not have a huge impact on the current position on inflation and cryptocurrencies.

This is because both candidates are seen as monetary-policy-doves hence likely to retain the status quo having supported FED’s inflation policies for long.

Following last week’s carnage, Bitcoin’s price attempted to recover over the weekend to no avail with $60,000 becoming resistant, only eight days to Up-November’s end.

Experts however believe the weakness is short-lived with the daily 100MA expected to act as support along the $53,000 area despite the price having broken the 50MA. The relative strength index(RSI) is also headed for the oversold region which could encourage buying activity as witnessed in Mid September. 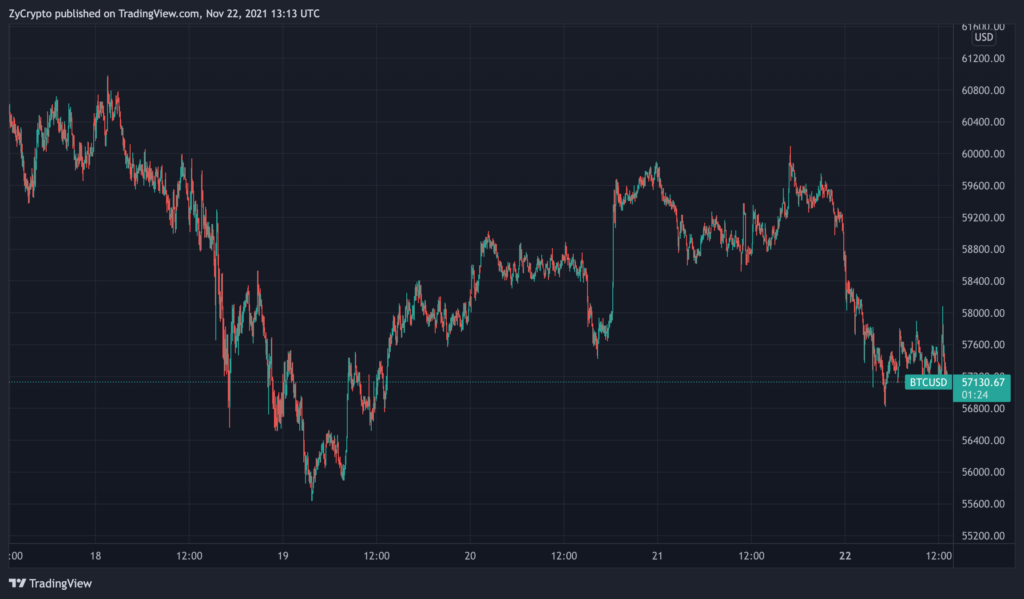 “Another comparison between the Bitcoin top structure in May 2021 vs. today,” Venturefounder’s analyst said on Monday, ” I think $53k (a number of confluence) is going to be key.”

Over $2.5 Billion Worth of Liquidations Raze Crypto Market Cap to $2.3 Trillion