XRP price has rallied by over 31% in the past week despite US-based crypto exchanges continue to delist XRP from their platforms. XRP price recovered from a low of $0.18 in the past week of SEC lawsuit against Ripple and traded over $0.33 briefly before falling back to current $0.28 support region.

So, is it true that 90% of XRP is actually traded outside US as claimed by Ripple CEO?

The recent  XRP price rally is predominantly carried by Asian exchanges, where,

The fourth-largest cryptocurrency recorded over $1 billion in trading volume in the past 24 hours.

Most of the US-based exchanges will halt XRP trading by January 15, however, exchanges outside the US do not seem to be much bothered about the lawsuit and have extended support to Ripple and XRP.  In fact, many exchanges even saw XRP taking the top spot in terms of daily traded volume above bitcoin which is currently selling at a premium on many exchanges.

Marc P. Berger, the acting enforcement director of the SEC also the man who led the lawsuit against Ripple is leaving the agency at the end of the month. Berger’s end of short tenure comes as good news for the XRP community as he played a key role in building the case against two of its executives.

XRP community’s rejoice was further elated with the possibility of  Gary Gensler, who has also headed CFTC in his earlier tenure to be new SEC Chairman . Gensler’s chances of replacing Jay Clayton under the new Biden administration couldn’t have come at a better time for Ripple as he back in 2018 has claimed XRP to be a bridge currency.

South Korea is one of the key markets for Ripple and thus XRP is fairly popular owing to top remittance services such as Sentbe, Hanpass, and WireBarley being RippleNet partners. This is the key reason behind high XRP trading volumes on Korean exchanges even at a time when many in the US believe XRP price would crash into oblivion. 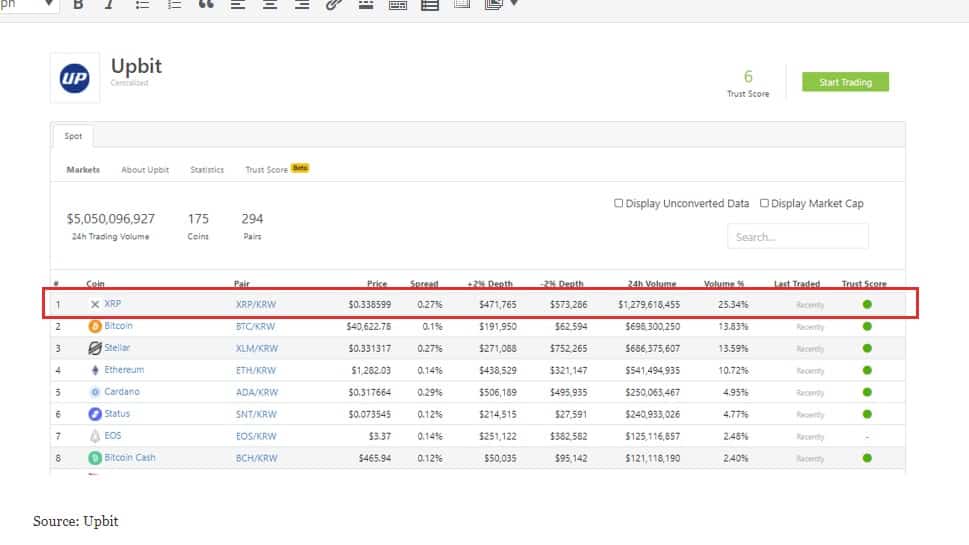 Bithumb, one of the largest South Korean exchanges, recently in news over acquisition speculations recorded $289 million in XRP trading volume.

Apart from the rising trading volume in Asian markets the transaction rate of XRP has seen a significant jump as well suggesting an increase in use.

While a lot has changed since 2018 for XRP and Ripple but his appointment would still give a ray of hope to the XRP community especially in the US. Another thing to note here is that Ripple’s majority of remittance business and XRP trading volume comes from outside the US something its Japanese partner SBI Holdings has also pointed out. XRP has held its ground quite well since the lawsuit and looking at the recent developments, the chances of it surviving the ongoing lawsuit looks stronger.

To keep track of DeFi updates in real time, check out our DeFi news feed Here.