On 25th July, the NEM Foundation announced their collaboration with Mana Labs on Twitter to unravel the blockchain potential of two communities; the Maori and Pasifika community in New Zealand. The goal of the collaboration is to develop the quality of life of the local community. 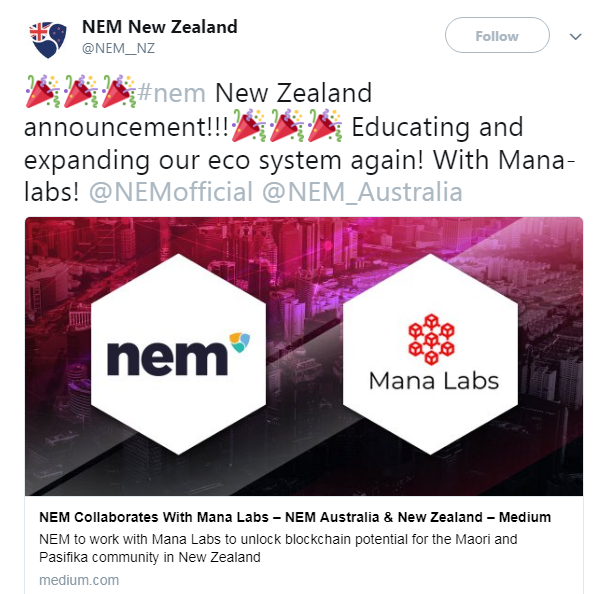 Launched on 31st March 2015, NEM is a blockchain-based platform that deals with a peer-to-peer cryptocurrency network. NEM was responsible for introducing the Proof-of-importance [POI] algorithm to blockchain technology along with encrypted messaging and multi-signature accounts.

Mana Labs was established in 2015 to reach out to the broader spectrum of communities in New Zealand including their own group, the Porirua, in Wellington by ‘fusing next-generation advancements with Matauranga Maori’ [Māori knowledge, i.e. knowledge of New Zealand’s ancestors].

The partnership between NEM and Mana Labs would involve establishing routine engagements between blockchain experts who can engage with the Blockchain Token Ideation, a Community Exchange.

The project would also provide admittance to varied channels for the Mana Labs network to engage with NEM’s $100 million Community Fund. Additionally, it will provide access to blockchain technology-based resources and coaching to develop skills and equip the developers with the technology.

“The potential opportunity to get the jump on the mainstream by leveraging key relationships and training for our communities is unreal. We get to develop use cases with cutting-edge tech solutions that can make a difference locally and be applied globally.”

According to Paurini, this would encourage “enterprise development and engagement in ICT where Maori and Pasifika representation is low”.

“We will be working closely with Mana Labs to ensure that this collaboration will lead to showcase to New Zealand’s commitment to stand out in the area of technology alongside its commitment to social impact and supporting communities.”

NEW YORK (Reuters) - The dollar slipped on Friday, as its safe-haven allure diminished, on hopes of a potential vaccine for the novel coronavirus that...