Ethereum has been struggling to match the momentum seen by Bitcoin as of late. While the benchmark cryptocurrency pushes to new post-2017 highs, ETH remains below its yearly highs set just a few months ago.

This underperformance is somewhat surprising, as ETH typically outperforms BTC during bouts of market-wide strength and underperforms it during downturns.

This shows an ongoing paradigm shift in the market, and it is looking increasingly more like late-2017 with each passing day.

One trader believes it is almost Ethereum’s time to shine, with a potentially imminent break of $480 being a catalyst for immense upside.

At the time of writing, Ethereum is trading up just over 2% at its current price of $470. This is where it has been trading throughout the past few days and weeks, with the selling pressure proving significant.

If it can gain a firm foothold above this level, it may target the $480 region, which is one of the last major resistance levels before $500.

A break above this level, coupled with flipping it into support, is vital for the crypto to see momentum matching Bitcoin’s shortly.

While sharing his thoughts on Ethereum’s near-term outlook, one analyst explained that he is closely watching for the cryptocurrency to claim $480.

Although there is resistance between ETH’s current price and this level, a break above here could shift the tides back into bulls’ favor.

“ETH Heat: From here till 480 there is resistance along the way up. The first at 465 has been broken, and volume is extremely strong with the POC being below the current price on the LTF.” 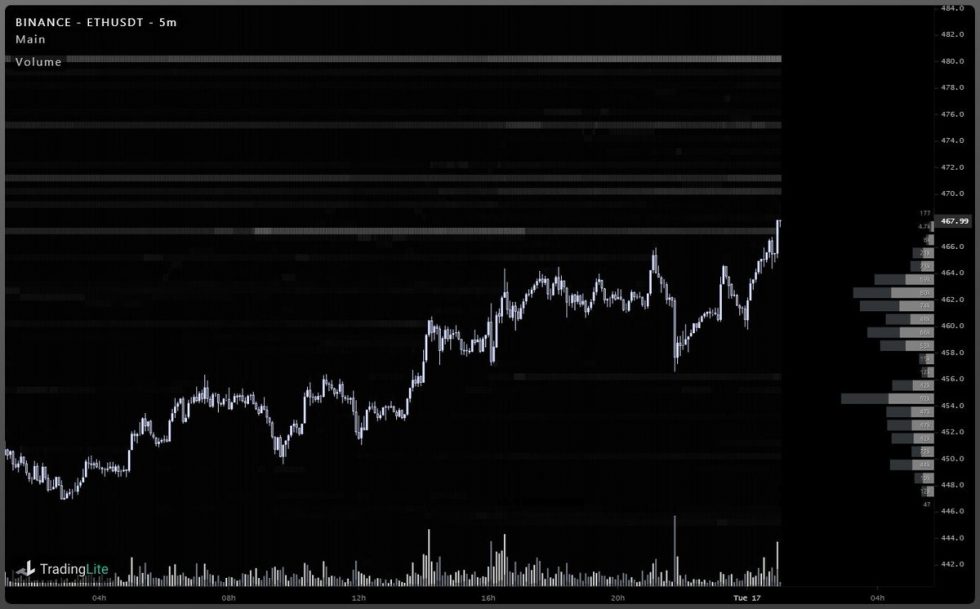 The coming few days should provide insight into just how heavy this resistance will be. A firm break above it could allow the entire market to explode significantly higher.

Biden told reporters on Friday he will not make any COVID-19 vaccine mandatory."I'll do everything in my power as president of the United States to...

Disclaimer: The findings of the following article are the sole opinion of the writer and should not be taken as investment adviceUnlike Bitcoin, Bitcoin SV has...

Nasdaq-listed billion-dollar company Microstrategy has made its third large bitcoin purchase. The company now holds about 40,824 bitcoins, worth over $780 million at the current...